The day began at Hongoeka marae sunny and relaxed with lots of healing, good food and korero at Conscious Roots. Here’s Kawika providing lomilomi as part of the Rongoa session. 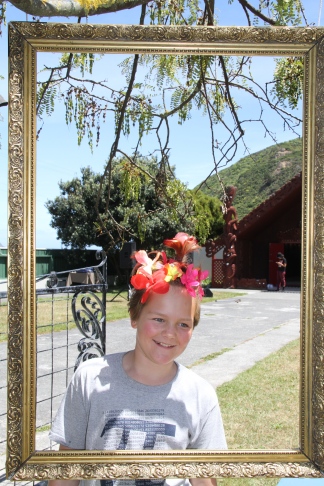 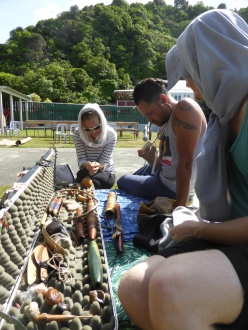 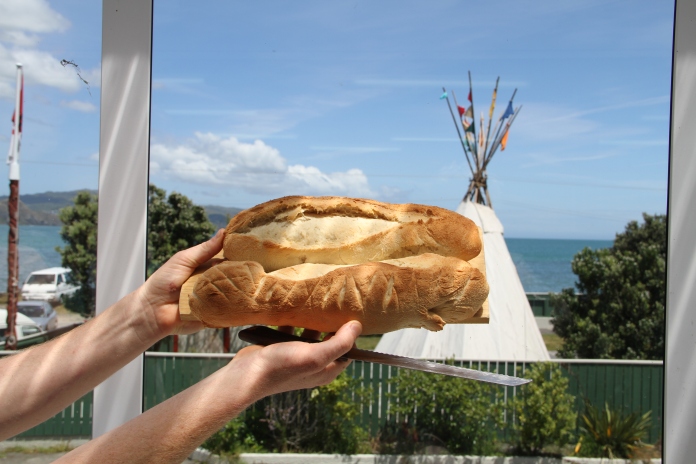 Back in the Porirua CBD it was the last day for Sharemart, with a patch fixed for a local by Vanessa Crowe. 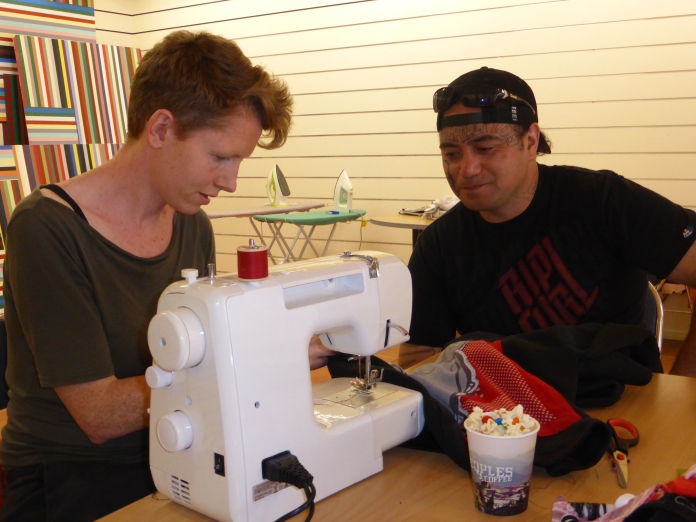 Around the corner at the TEZA Hub, Porirua People’s Library had a launch. Many were issued with membership cards. 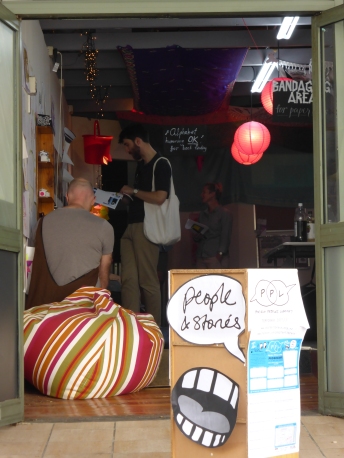 We bade farewell to All Good? and its many collected stories and hair. 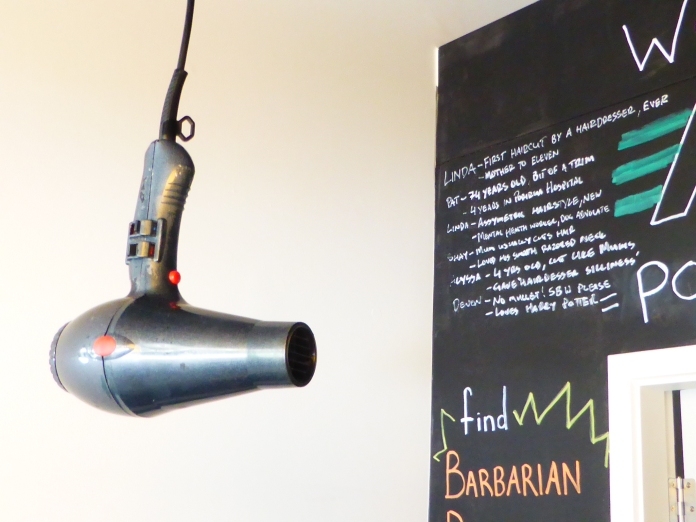 Then, as the final part of her Citizen’s Active Funeral Paula MacEwan hosted a playful TEZA Funeral.

We were invited to write down our ‘sins of TEZA’ and then place them in one of Simon Gray’s ovens.

As we reflected on at the Poroporoake, TEZA felt more a beginning than an ending. With the new shoots of Alicia Rich’s wheat beds outside the TEZA Hub two weeks later, we raise a toast to Porirua’s beautiful future.

The final weekend of TEZA 2015 saw the rain wash things clean overnight to bring on a sparkling weekend at Hongoeka Marae for the Conscious Roots festival, overlooking the heads of Porirua Harbour.

Manuhiri were welcomed in the morning at powhiri before the programme got underway with manifold activity around the marae, great kai and company. 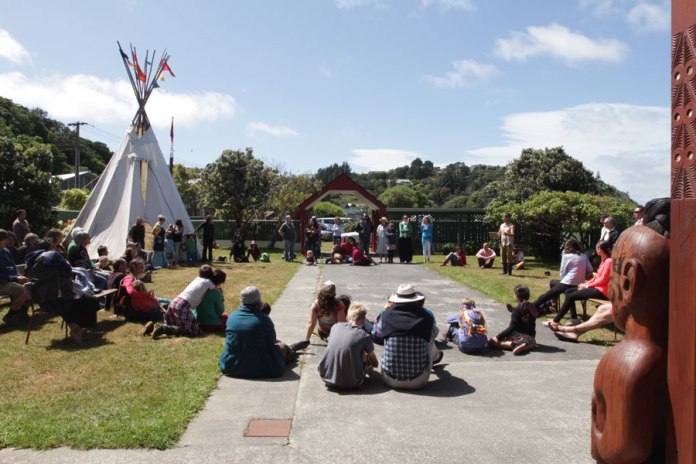 Jessica Hutchings was one of the many speakers in the wharenui. 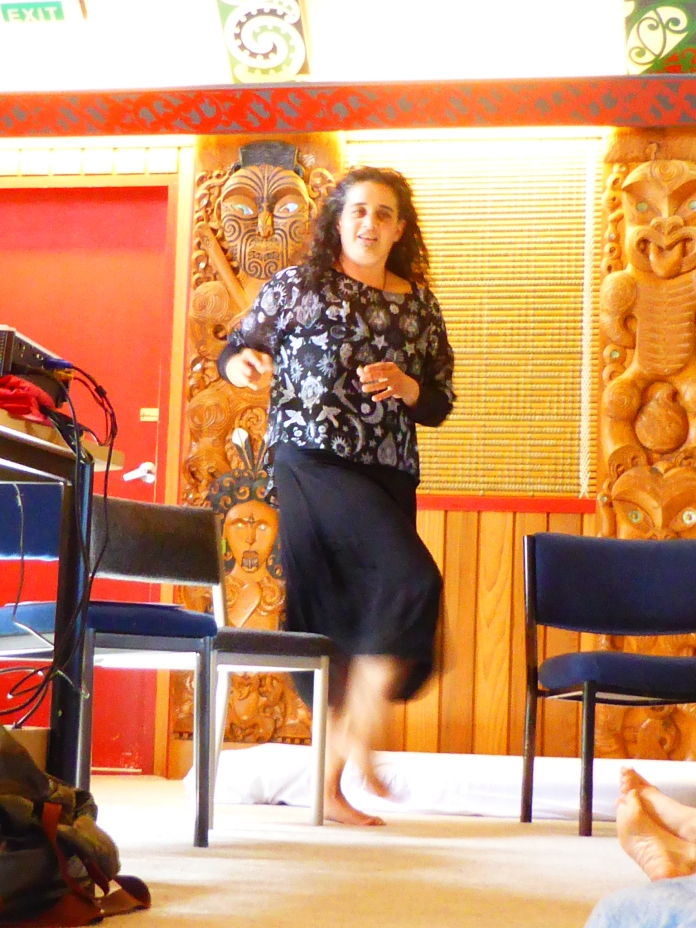 And flags made by the tamariki of Kaiapoi from the TEZA 2013 Kaihaukai project in Te Wai Pounamu joined those at Hongoeka.

Kaia Hawkins led the ever busy yet chilled tamariki zone.

At lunchtime some of us traveled back to the Porirua CBD for the launch of the Young Visionaries project at The Old McDonalds (which continues to be exhibited) with the principals, teachers, students and their families of Discovery and Russell Schools. Here Sose Annandale from Russell School speaks.

Then back to the pa, where after nightfall we followed navigation by the stars with Toa Waaka. Here’s Linda Lee doing poi whilst Matiu Te Huki plays. 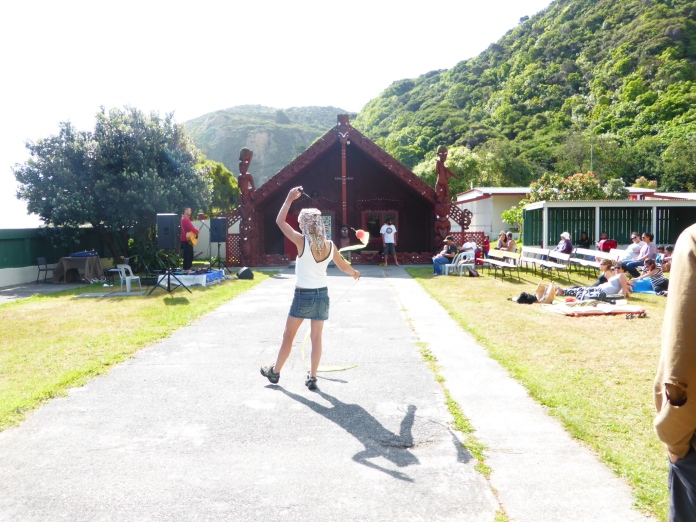 Andy Dolling and tamariki in the teepee. 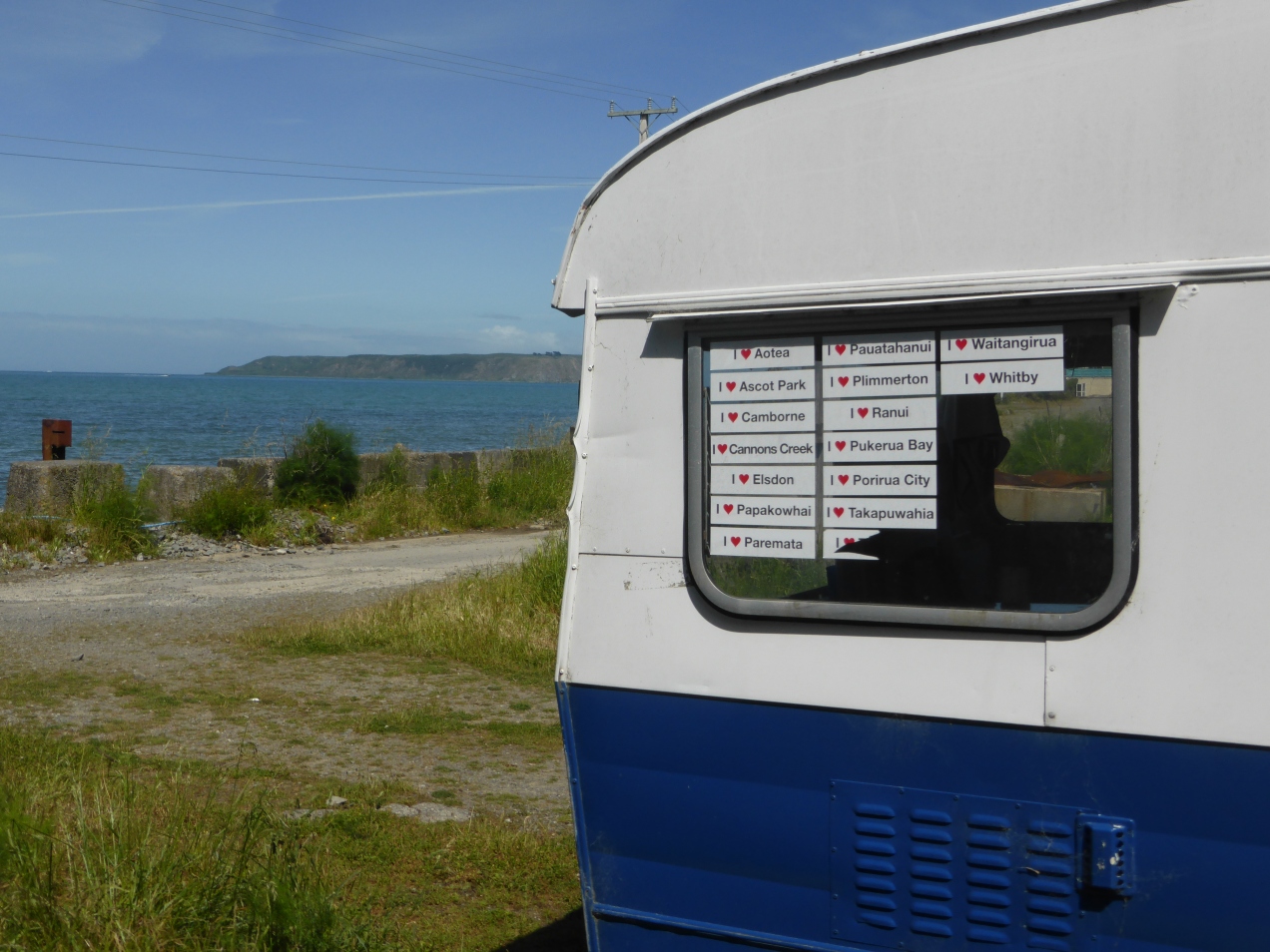 Getting back to our roots

The TEZA daily respondents have considered the nature of TEZA as a whole – its achievements, its challenges, its failings and its successes in a critical and considered way. Many of their questions were raised for me over the two days I spent at TEZA events.

On Friday 27 November at midday I attended ‘Creating Local Art Spaces’ at the TEZA hub. Here, artists and arts administrators gathered to talk about where community art is heading. What sort of spaces do Porirua artists need? What are the best ways for artists and communities to meet? Among the fifteen or so attendees were a handful who have successfully (albeit with challenges) established art spaces in their own communities in New Zealand.

In contrast, several unsatisfied Porirua artists highlighted a lack of those spaces in Porirua now. They’re not feeling the love from the Porirua City Council and, according to those present, the waiting list for the community space at Pātaka was such that it removed it as an option.

TEZA was a welcome addition to the community for these artists. But they were also looking for practical advice: how do you find a space to lease? How do you pay for it? These questions were answered in part by Kim Lowe, a Christchurch based printmaker who joined the meeting via Skype. She discussed her own community art space, Toi Te Karoro, which serves the New Brighton community as a studio, exhibition space and local event hub, and was established there after TEZA 2013. Lowe highlighted the usual barriers — funding, community buy in, lease negotiations. She described the challenge of working in a space that, because she is only paying half the rent, receives minimal maintenance from the landlord. These are the issues that community art groups and emerging artists face when trying to cater for their own needs in ways that arts institutions and local government are not. It’s an uphill battle.

Ideally, what TEZA and the Urban Dream Brokerage Porirua Pilot can provide is somewhat of a template for those looking to try something similar on a smaller scale. What many of those at the meeting were actually asking for, it seemed, were the tools to take the next step.

On Saturday I drove out to Hongoeka Marae for the Conscious Roots Festivá. This first iteration of Conscious Roots saw the bringing together of those with a shared ethos regarding food production and the environment over two days. Local farmers, healers, artists and avid gardeners contributed workshops and stalls (either for free or koha) on a range of topics with the central focus of maintaining a healthy mind, body and natural environment. Throughout the day upwards of 120 adults and children enjoyed the events and the sun, allowing for multiple parallel sessions to be intimate.

The programme prepared by the organisers was jam-packed and I looked forward to many of the workshops and activities such as composting and bee keeping, a ‘wild-walk’ (I didn’t know what this was, and unfortunately never got to find out, but it sounded cool), food foresting, bread making, live music, children’s activities and lots of food. The hangi with a selection of healthy salads was a highlight—slow cooked lamb from a local farmer and Simon Gray’s bread with organic butter had me going back more times than I care to admit. The general vibe was relaxed, generous and festive and the many children appeared to be having the time of their lives.

I seemed to be the only person concerned with the timetable and the specific workshops. Many of those advertised seemed not to take place, or perhaps I just couldn’t find them. It didn’t matter, there was still plenty on offer, but my take-home knowledge (apart from a fantastic lesson with Simon about sourdough) was limited. I also wondered whether those in attendance were already converts, and further education and hands-on learning was less of a concern. I was ready for some of my own ideas and values to be challenged while also taking home some new skills, but this might have been a little ambitious. Someone with an awesome idea doesn’t necessarily become a good organiser when tasked with putting it into action, so perhaps with some more planning and development, the next Conscious Roots might be a little more refined. It would also be nice to see a more diverse audience in terms of those looking to learn about the themes and gain some skills, rather than just those who are already subscribed. [1]

Conscious Roots was definitely successful in terms of the enjoyment of all on the day. What it can offer the wider community, however, I’m not sure. Perhaps it could be pared back a little to be taken on the road and be accessible for different audiences. That’s the beauty of Simon Gray’s bread-making initiative: it’s simple, accessible, portable, and the idea has longevity, even without Gray’s presence.

Legacy and longevity have been a primary concern for the TEZA administration and contributing artists in the development of this year’s programme. 13 of the 14 projects have been present in Porirua for upwards of three months leading up to TEZA, all were highly collaborative and four projects were Porirua initiated. The arrival of TEZA on Porirua’s doorstep wasn’t a complete culture shock for the residents — local artists worked alongside the visitors to ensure a gradual and thoughtful introduction of the initiatives into the community.

I will follow the conclusion of these projects and their withdrawal from the community, however, with great interest. Whether TEZA has sparked in Porirua’s creative community renewed passion and motivation is the real question, because surely TEZA’s endgame is for the community to one day lead these initiatives themselves. Based on the local projects during TEZA, there is no doubt that they are capable.

[1] Letting Space notes: Conscious Roots was designed as a small restorative gathering for people who were already working in land-based action and healing.  Letting Space takes responsibility for not having communicated that effectively to the writer.