Celebrated NZ performance artist Mark Harvey’s work is often infectiously joyous and absurd but has a serious purpose. In 2014 he wrestled people about climate change on the sides of the Venice Canal as part of the Venice Biennale.

Volunteer Refinery will be a week-long participatory art project promising the generation of changes in public behavior towards greater involvement in socio-ecological and political issues facing the region around Te Awarua o Porirua (Porirua Harbour) and Aotearoa in general.

Harvey, an over-qualified and experienced community volunteer will be leading a programme consisting of a range of workshops, seminars and consultation sessions that play with notions of ecological productivity in helping to up skill locals in their volunteering around Porirua Harbour.

Rather than do what the local community already does well, Harvey aims to generate reflection on what issues can be at stake for volunteers in this local context. 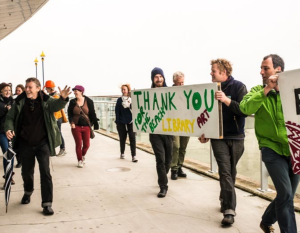 We may not always be serious, but serious is always our intention.

This project will be a development of previous works by Harvey with Letting Space: Productive Promises (TEZA 2013) and Productive Bodies (2012).