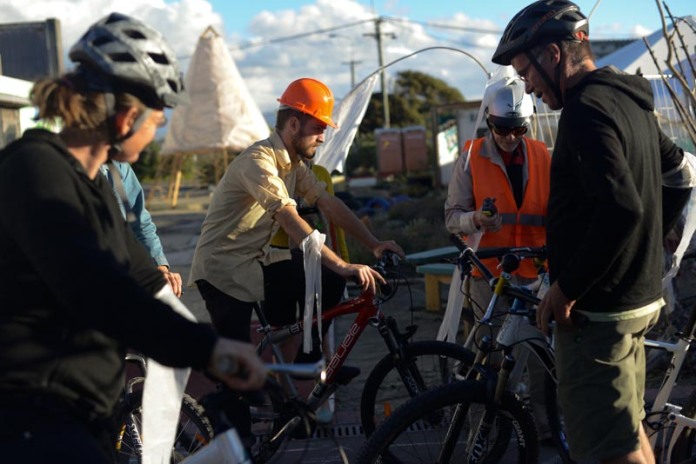 Creating soundlines around, about and through New Brighton, ‘The Bicycle Choir’ was a new Dadson “sonic cum choreographic plot” to mobilise cycling and singing enthusiasts in Christchurch, sounding the streets of the suburb. It aimed to contribute, in its way, to fostering the creative spirit of New Brighton, support its recovery and also the active cycling movement in and around Christchurch. Every fine evening cyclists convened at the TEZA hub, practiced a choral work, and then headed off as a group, that could peel off solo, in duos, trios or larger groups, sounding the suburb. As a flat city Christchurch provides amble opportunity for cycling as a form of transport. The earthquakes have badly damaged roads and the clearances of land – their future often uncertain – have left opportunities for the development of new cycling paths and networks. Dadson’s sonic-cycling group action had a spirit of healing and in its playfulness encouraged a continuance of the innovative thinking that has characterised post-quake community activity. “The notion of a sound-in-motion – cycling song-lines and singing cycle lanes – is not quite the usual challenge vocalists or cyclists might face,” Dadson wrote in his appeal for participants. “It is rather an adventure we embark on with no clear outcome other than the shared goal of working together to create an instrument of unified sound and motion. One that leaves its footprint only as an imprint on the locality and on the collective memory and imagination.” 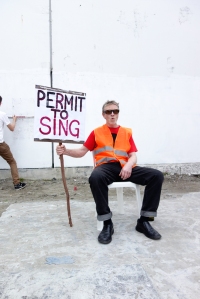 Phil Dadson is an established New Zealand artist and Arts Foundation Laureate. Dadson (aka Dadsonic) has a diverse practice that includes performances and events, improvisations with his invented instruments, video installations and mapping musical journeys. ‘Bicycle Choir’ for Dadson recalls his work once as a postie – one who loved nothing more than to scat-sing as he cycled. Dadson exhibits and performs widely in NZ and internationally. More information: www.sonicsfromscratch.co.nz