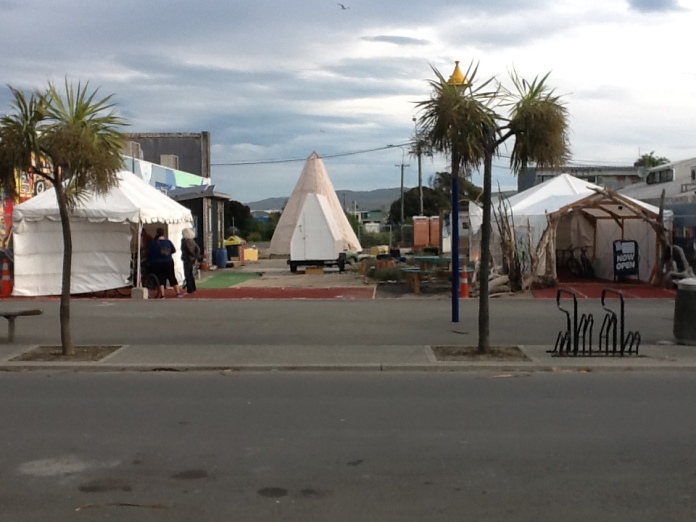 The TEZA site or hub at the Creative Quarter, 101 New Brighton Mall (a community space in a vacant lot enabled by Renew Brighton over the previous year) was created to provide a welcoming space for discussion, meeting and activity. Led by artist Tim Barlow, in conversation with other artists and with support from the Positive Directions Trust, the hub drew on the architectural history of occupation, protest and transitional encampments, including the temporary marae of the Maori protest movement and politics of the recent Occupy Movement. It aimed to contribute to exploring the site’s potential future use and role in the community, and recognise the considerable creative community work undertaken in the surrounding area. Central New Brighton is full of public art in now vacant building sites. The use of such a space draws on Letting Space and Tim Barlow’s previous work in revitalising urban space, with Urban Dream Brokerage and many public art projects.

A wharenui with gateway passage formed the central meeting area for discussions and workshops, with another tent used to greet the public on the street. This provision of street public engagement spaces was important to the TEZA kaupapa. At the centre of the site was ‘Te Ao Mārama’, a central unifying space (see next page). The TEZA site was designed to also accommodate outdoor activity and practical facilities (wharepaku, an office with wifi, and caravan for night-time security). Importantly it aimed to work with, rather than against, the features of the site already created by the community (including athl

etic track taken from the now derelict Queen Elizabeth II Park), and allowed the public to continue to use the space as a busy new pedestrian thoroughfare. These elements of the design were important for allowing community ownership of activity over the week. 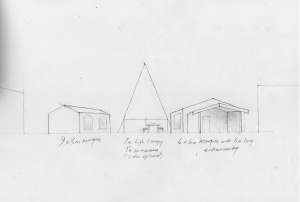 Tim Barlow is a Wellington artist with an MFA from Massey University Wellington 2011. He has extensive experience nationally and internationally in film and television art departments, and specialises in crossing boundaries of film production and art production. He has worked on collaborative projects with community and film based organisations. Commissioned projects include Manawatu Art Gallery, MONZ, Artspace (Auckland), Dowse Museum, Wellington Activity Centre, Vincents Art Workshop and many film production departments.

Barlow’s previous works include ‘The Still’ (1994), Dunedin, and ‘The Public Fountain’ (2012), with Letting Space in Taupo and Turangi in 2012, which saw a publicly activated geothermal fountain as the centrepiece for discussions with the community about their ownership of the geothermal power resource. He is currently completed a PhD at Massey addressing the ethics and politics of community art practice and social justice, and the social use and function of artists.